Ismael Guadalupe Ortiz, a public high school teacher who lived and taught on Vieques, also fought against the use of Vieques by the U.S. military for bombing practice. In his testimony he states,

All Viequenses remember the death of Chulto Legrán, a twelve year old boy, victim of one of the many bombs that the navy left on our soil. This occurred in 1953.

Ortiz organized one of the first protests in Vieques against the U.S. military in 1964.

Ismael Guadalupe Ortiz’s Testimony on Vieques, Puerto Rico is read by Mario Murillo on March 10, 2007, at The Great Hall at Cooper Union, New York, NY. The excerpt is from Voices of a People’s History of the United States edited by Howard Zinn and Anthony Arnove. 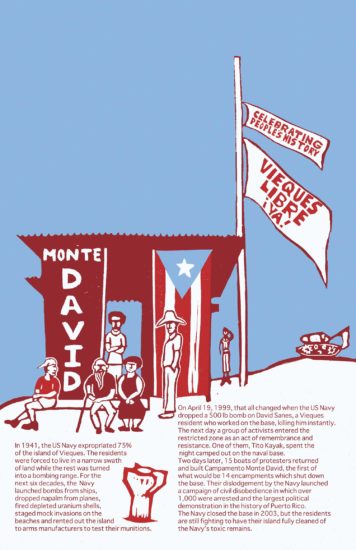 Learn more about Vieques from this print in the Justseeds “Celebrate People’s History” series. The poster by Dave Buchen begins:

In 1941, the US Navy expropriated 75 percent of the island of Vieques. The residents were forced to live in a narrow swath of land while the rest was turned into a bombing range. For the next six decades, the Navy launched bombs from ships, dropped napalm from planes, fired depleted uranium shells, staged mock invasions on the beaches, and rented out the island to arms manufacturers to test their munitions. Continue reading.