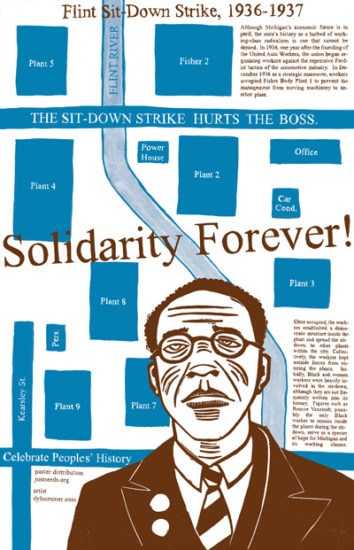 This poster by Dylan Miner of the JustSeeds Artists’ Cooperative pays homage to Roscoe Van Zandt and his fellow Flint Sit-Down strikers of 1936-37.

Viewed as the birth of the modern labor movement, on December 30, 1936, Michigan autoworkers “sat down” in the automobile factory in one of the first sit-down strikes in the United States.

The autoworkers began their 44 day occupation of the General Motors Fisher Body Plant Number One in Flint, Michigan to win recognition of the UAW and other demands. After taking over the factory, the workers self-organized an autonomous and democratic structure.

HistoricalVoices.org offers interviews, photos, and more on the strike.

In the film Roger and Me, Michael Moore examines Flint 50 years later. Roscoe Van Zandt, the only African American known to have been inside during the Flint Sit-Down Strike. Photo from the Walter P. Reuther Library. Click image for more information.