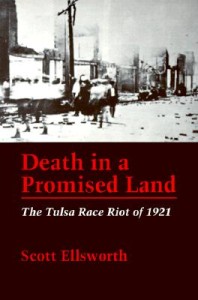 When a crowd began to gather outside the jail in Tulsa, Oklahoma, on the evening of May 31, 1921, the fate of one of its prisoners, a young black male, seemed assured. Accused of attempting to rape a white woman, Dick Rowland was with little doubt about to be lynched.

But in another part of town, a small group of black men, many of them World War I veterans, decided to risk lives for a different vision of justice. Before it was all over, Tulsa had erupted into one of America’s worst racial nightmares, leaving scores dead and hundreds of homes and businesses destroyed.

Exhaustively researched, Death in a Promised Land is compelling story of racial ideologies, southwestern politics, and yellow journalism, and of an embattled black community’s struggle to hold onto its land and freedom. More than just the chronicle of one of the nation’s most devastating race riots, this critically acclaimed study of American race relations is, above all, a gripping story of terror and lawlessness, and of courage, hedonism, and human perserverance. [Publisher’s description.]