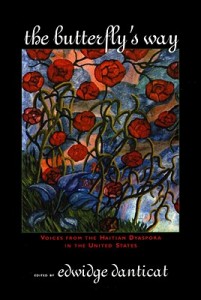 In five sections — Childhood, Migration, Half / First Generation, Return, and Future — the contributors to this anthology write powerfully, often hauntingly, of their lives in Haiti and the United States. Jean-Robert Cadet’s description of his Haitian childhood as a restavek (a child slave) in Port-au-Prince contrasts with Dany Laferiere’s account of a ten-year-old boy and his beloved grandmother in Petit-Goave. We read of Marie Helene Laforest’s realization that while she was white in Haiti, in the United States she is black. Patricia Benoit tells us of a Haitian woman refugee in a detention center who has a simple need, a red dress — dignity. The reaction of a man when he marries the woman he loves is the theme of Gary Pierre-Pierre’s “The White Wife”; the feeling of alienation is explored in “Made Outside” by Francie Latour. The frustration of trying to help those who remained and of the do-gooders who do more for themselves than the Haitians is described in Babette Wainwright’s “Do Something for Your Soul, Go to Haiti.” The variations and permutations of the divided self of the Haitian emigrant are poignantly conveyed in this unique anthology. [Publisher’s description.]