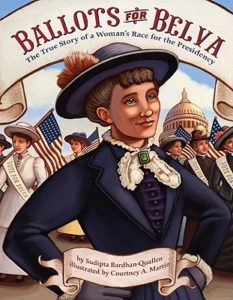 This well-illustrated biography tells the story of Belva Lockwood, an audacious woman who ran for President in 1884, almost three decades before U.S. women’s right to vote was ratified by the 19th Amendment. She had to fight her way into and through law school and was the first woman to argue before the U.S. Supreme Court. This book is especially useful in showing how the right to vote was fought for and won through actions by many people who refused to tolerate inequality.