The original idea for the Zinn Education Project’s “If We Knew Our History” column grew out of our reading “American History Lessons,” by Melissa Harris-Perry in The Nation magazine. Harris-Perry’s article, reproduced here, is a meditation about the role of Black History Month. She begins with an activity that teachers might try, as well. Ask students to name five important African Americans—not including Martin Luther King Jr. and Barack Obama (and not including athletes and entertainers)—and tell something about their accomplishments. It’s a quick way to demonstrate the continuing importance of Black History Month.

Yet Harris-Perry has a broader aim with the column. She argues that we suffer from a “national deficit of historical knowledge” and that this deficit has contemporary political consequences. If we knew our history, she suggests, people would be less likely to follow the bigots who patch together historical symbols and soundbites to justify their right wing nostrums. And if we knew our history, we’d be more likely to appreciate and defend the accomplishments of social movements.

By Melissa V. Harris-Perry
We are in the final hours of February 2011. These are the last moments of this year’s Black History Month. February is always my busiest month for travel and public lectures as I join dozens of other professors whose research takes on sudden relevance for four short weeks. Typically, I spend some time in February responding to queries about the origins of the month-long observance. Invariably, I am also asked to defend its continuing relevance.

Student reporter: Do we really need a separate black history month now that we have a black president?

Me: Can you name five important African-Americans, not including Martin Luther King Jr. and Barack Obama, and tell me something about their contributions to America?

In these waning moments of yet another busy February I admit to feeling particularly defeated by our typical Black History Month approach, which tends to be rooted in a recitation of “little known black history facts” and the celebration of a few accomplished and brilliant individuals. Our contemporary political environment cries out for an urgent, collective immersion in accurate American history, including its complicated intersections with race and racism. I have a professional nerd fantasy in which I imagine every cable news program devoting a quarter of every hour to the study of American history. I can hear the ratings plummet, but I love the idea of taking just a few moments to inform the public about the broad outlines of our key historical moments, so that these moments cannot be so easily twisted, distorted and misused by ideological movements. Indulge the fantasy for a moment.

What might happen if Americans understood Revolutionary War history? Maybe it would be considerably harder for the Tea Party to convince voters that their anxieties about a president elected with 53 percent of the popular vote by an electorate that enjoys universal adult suffrage are “just the same” as the concerns of colonists who decried taxation without representation under the rule of an absolute monarch. No sustained engagement with The Federalist Papers could allow the narrow, simplistic assertions about the intent of the founding fathers so often present in Tea Party rhetoric. The Tea Party’s ability to deploy the symbols and language of patriotism requires broad and deep ignorance of American history. The American public is woefully unprepared to fact check their bold assertions that they are the keepers of the authentic national legacy. I do not mean to suggest that Revolutionary War history or The Federalist Papers reveal that America’s founders were actually progressive liberals, likely to have subscribed to The Nation. Rather, American history teaches us that the founders were complex, that the founding was contested and that any attempt to reduce American history to soundbite ideology is woefully inadequate. If we shared a deeper and more accurate understanding of our history we would not all be liberals, but perhaps we would be more careful. 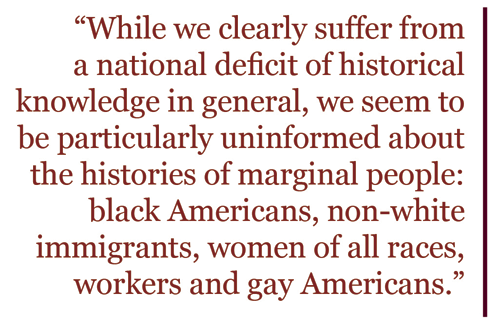 While we clearly suffer from a national deficit of historical knowledge in general, we seem to be particularly uninformed about the histories of marginal people: black Americans, non-white immigrants, women of all races, workers and gay Americans. I suspect secession would seem less reasonable to those who had a clear understanding of American Civil War history. I believe Americans might be better equipped to recognize and appreciate the consequences of the racial angst directed at President Obama’s administration if they were better versed in the decades of backlash that followed Reconstruction. I am confident that serious study of American labor history would remind voters of all that is at stake in the current battles to maintain collective bargaining rights. I have no doubt that young women would feel more urgent about protecting their reproductive rights if they were more fully versed in the history of women’s struggle for equality.

There is no single, historical truth that will lead all Americans to conclude the same things about our future. History is a collective project of making meaning out of the events of the past. But history is more than an academic exercise. It is the critical basis for contemporary political work. Textbook committees in Texas are well aware of the political relevance of history, which is precisely why they seek to sanitize and control its contents. The Tea Party is aware of the power of historical discourse which is why they cherry-pick heroic moments (the Boston Tea Party) and deploy vague references to historic enemies (Hitler, socialism). The results of our collective historical ignorance are profound. Every February I meet hundreds of students and adults who know very little about even the most recent racial history in America. I have witnessed ah-ha moments for many who draw connections for the first time between the narratives of past decades and the experiences of our current political era. Progressives might well invest our resources in fighting just as hard for accurate understandings of the past as we do for current policy initiatives in the moment.

▸ Used with permission of The Nation. Originally published February 28, 2011, at TheNation.com. 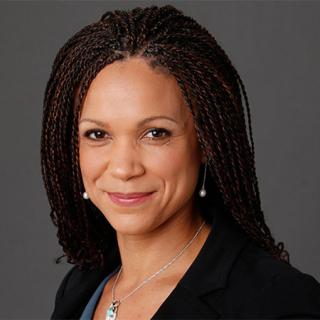 Melissa Harris-Perry is a writer, professor, television host, and political commentator. She is the author of Sister Citizen: Shame, Stereotypes, and Black Women in America (Yale University Press). 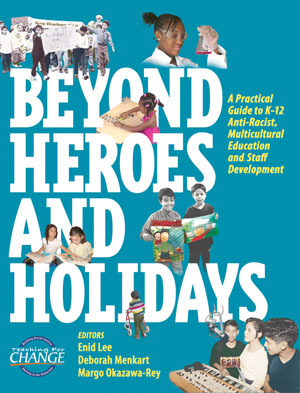 Beyond Heroes and Holidays: A Practical Guide to K-12 Anti-Racist, Multicultural Education, and Staff Development

Teaching Guide. Edited by Enid Lee, Deborah Menkart and Margo Okazawa-Rey. 2006. 436 pages. Guide for teachers, administrators, and parents shows how to teach from a multicultural perspective that goes beyond the superficial "heroes and holidays" approach.