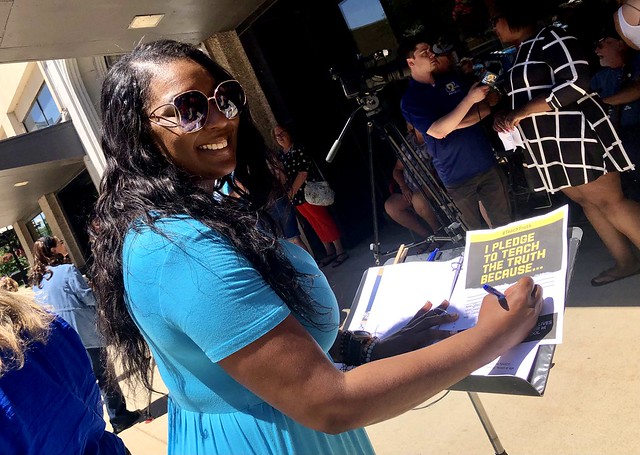 Educators in Waterloo, Iowa met at the Black’s Building in downtown Waterloo and walked to two more sites as part of the Zinn Education Project Day of Action, a call to educators to gather at historic sites and pledge to teach the truth on June 12, 2021. The event was covered by two news channels.

If you are standing with me, it is because you recognize that:

Lawmakers in at least 15 states are attempting to pass legislation that would require teachers to lie to students about the role of racism, sexism, heterosexism, and oppression throughout U.S. history.

Educators across the United States are signing a pledge to teach the truth. The pledge states:

We the undersigned educators will not be bullied. We will continue our commitment to develop critical thinking that supports students to better understand problems in our society and to develop collective solutions to those problems. We are for truth-telling and uplifting the power of organizing and solidarity that move us toward a more just society.

If you are standing with me it is because you agree with what Professor Julian Hayter of the University of Richmond recently stated on NPR (June 5, Morning Edition, Saturday):

“ . . . what we’ve seen in the telling of American history for most of the 20th century is that certain people’s history had been erased. If you look at a history textbook from the mid-20th century, you’d be hard-pressed to find people of color, women and even poor white folks . . . and when you see these folks in these texts, they’re almost always portrayed as inconsequential or dehumanized figures. . . the Tulsa incident isn’t a one-off. The burying of this history is more in keeping with the ways that American history was taught throughout the 20th century than otherwise, in large part because of it – in some ways, the teaching of American history up until recently was about heritage as much as it was about history.”

“History is an attempt to reconstruct and interpret actual events and lived experiences. It follows rules of evidence and is peer-reviewed and debated. . . what a lot of Americans understand is heritage, which is a romanticized version of the past, usually devoid of the darker chapters . . . these are the feel-good stories and, in some cases, stories that don’t really deal with historical evidence . . . of course, there are historical facts. The interpretation of those facts, however, is precisely what historians do. . . a lot of people aren’t necessarily familiar with that process.”

“ . . . racial reconciliation is not a zero-sum game . . . we can tell a more complete story of American history without making people feel guilty or being made to feel guilty.”

“Recognition can be restorative . . . it asks people to question how racism isn’t necessarily an individual act of malice, but it’s been institutionalized, especially in terms of public policy and private action.”

Finally, if you are standing with me, we are acknowledge three sites where incidents of systemic racism took place.

Willie Mae Wright came to Waterloo in the 1950s. She recalls an employment agency rejected her application because “they didn’t take colored people.”

For Wright, racism here was more insidious than the in-your-face racism of her native Mississippi.

“In Mississippi, they (whites) let you know where they were coming from,” she said. “But here, you didn’t know until you approached it. And then you were knocked down with it.”

For example, Blacks could work in the kitchen at the Tea Room in the Black’s Building, 501 Sycamore St. but could not eat there.

Willie Mae’s employment application was not denied because of the content of her character, nor was that the reason she could not be served at the Black’s Tea Room. Those opportunities were denied her by policies made by an institution based on the color of her skin. To teach it otherwise, or to not teach about it all, would not be teaching truth.

Sharon Goodson, former board chairwoman of the NAACP, recalled stepping up and drinking from the “wrong” faucet at age 13 in the back of the S.S. Kresge store on 215 East Fourth Street in the early 1960s.

“One (fountain) said ‘colored,’ one said ‘white.’ I was small for my age, so I pretended I couldn’t read,” she said with a smile. “It started at a young age with that kind of stuff.”

Sharon Goodsen was not discriminated against at the Kresge drinking fountain because of the content of her character. She was discriminated against by policies put in place by an institution based on her skin color. To teach it otherwise, or to not teach about it all, would not be teaching truth.

Jim Day, who is white, recalls not being able to sit with all his East High School football teammates in the local movie house in the 1950s. “I remember going to the old State Theater down on 212 E. Fourth Street, and Charles Butler (who was Black) was with us. We said, ‘C’mon let’s go in.’ He said, ‘I gotta go upstairs.’ The state didn’t allow Black kids and white kids to sit together in the theater. It didn’t seem right. We were teammates on the field, but not necessarily allowed to be teammates in other places.”

Charles Butler was banished to the balcony, not because of the content of his character, but because of policies put in place by an institution based on his skin color. To teach it otherwise, or to not teach about it all, would not be teaching truth.

In 1940, a color-coded Federal Housing Administration map of Waterloo’s housing showed that 43% was deemed dangerous or “hazardous.” The Home Owners’ Loan Corporation described these areas (just a few blocks from where we are) as “characterized by detrimental influences in a pronounced degree, under desirable population or infiltration of it.”

They recommended lenders refuse or conservatively make loans in the area.

Potential homebuyers in these areas were not denied loans or housing due to a deficit in the content of their character; they were denied by systemic policies made by institutions based on the color of their skin. To teach it otherwise, or to not teach about it all, would not be teaching truth.

These were examples of systemic policies, not personal prejudice. A law, House File 802, signed by our governor this past Tuesday, and taking effect on July 1, threatens to prohibit or discourage teaching these historical facts. As we have stated, to teach them otherwise or to not teach about them at all is not teaching truth.

The ACLU and the Iowa-Nebraska NAACP have opposed this legislation, and now our group representing the Zinn Education Project, the Facebook group, Project for the (1619) Project and Americans for Democratic Action (Thanks, Chris Schwartz!) has spoken encouraging educators to pledge to teach the truth. This conversation will likely need to continue. Go to #TeachTheTruth or @ZinnEDProject. Thanks for being a part of it!

Here are the sources McCabe uses for his remarks and the history stops.