On June 11, 1962, Students for a Democratic Society (SDS) held its founding convention in Michigan and issued the Port Huron Statement, laying out its principles and program, including: “…our experience in the universities [has not] brought us moral enlightenment. Our professors and administrators sacrifice controversy to public relations; their curriculums change more slowly than the living events of the world; their skills and silence are purchased by investors in the arms race; passion is called unscholastic. 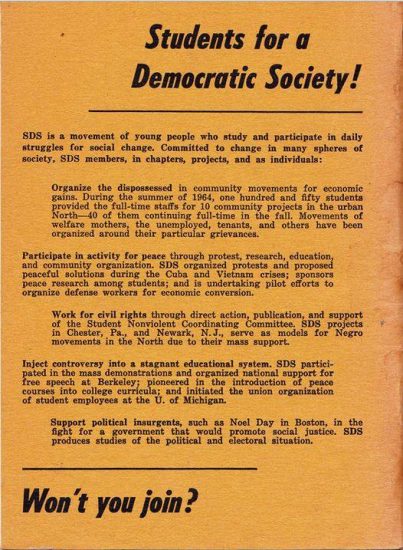 The closing words of the Port Huron Statement, the founding document of the Students for a Democratic Society, which met June 11-15 in Port Huron, Michigan.

“The questions we might want raised — what is really important? can we live in a different and better way? if we wanted to change society, how would we do it? — are not thought to be questions of a ‘fruitful, empirical nature,’ and thus are brushed aside.”

SDS was inspired in part by the work of the Student Nonviolent Coordinating Committee in Mississippi where SDS founders such as Tom Hayden had played an active role in the struggle for voting rights (in the face of terrorist attacks) and democracy.