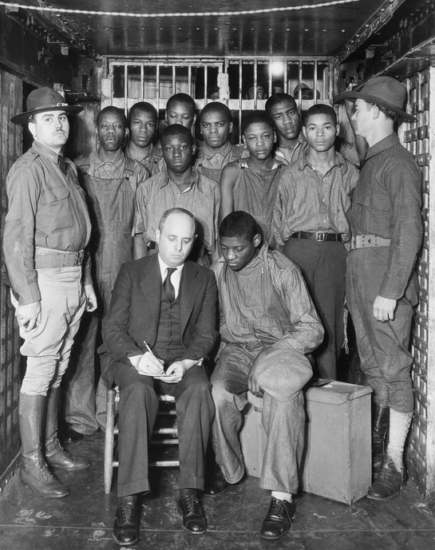 The Scottsboro Nine. Samuel Leibowitz, the chief defense attorney, is seated and speaking with Haywood Patterson. Source: Encyclopedia of Alabama.

Eight of the nine young men were convicted and sentenced to death by an all white jury. In response to international protests, their case went to the Supreme Court where their convictions were overturned in Powell v. State of Alabama (1932) and new trials set.

As their cases wound their way through the legal system and campaigns continued for their release, they collectively served more than 100 years in prison.

Two people engaged in the campaign for their release were Raymond and Rosa Parks. The organizing was dangerous and clandestine. Raymond Parks explained:

I would stand in front of a certain street light and lean over and tie my shoe a certain way to give a signal as to where we would meet and the day and the time. 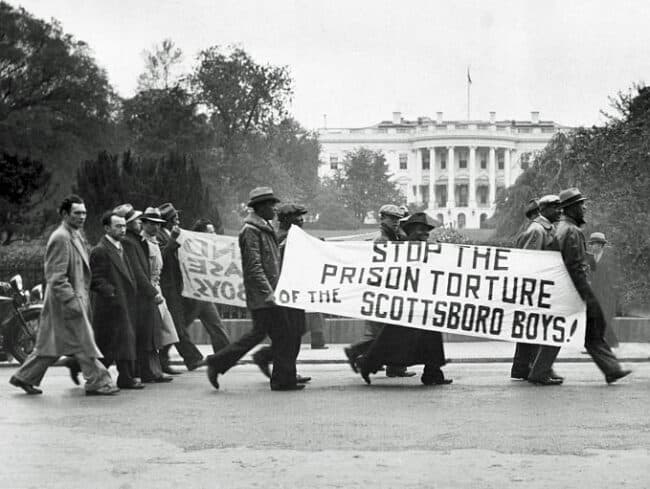 Part of a crowd of 4,000 calling for freedom for the “Scottsboro Boys” pass the White House May 8, 1933 on the Ellipse side. Source: Washington Area Spark

For more information including a timeline and primary sources, see the website for the PBS film Scottsboro: An American Tragedy and the Encyclopedia of Alabama. Find more photos at Washington Area Spark.