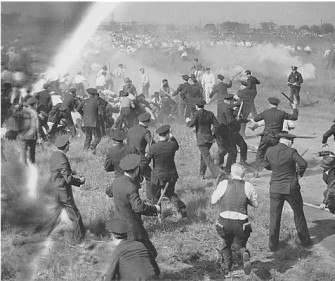 On May 30, 1937, Chicago police attacked a Memorial Day gathering of unarmed, striking steelworkers and their families. The police shot and killed ten of the strikers. Read an essay below by renowned author Howard Fast and watch video clips.

Memorial Day in Chicago in 1937 was hot, humid, and sunny; it was the right kind of day for the parade and the holiday, the kind of a day that takes the soreness out of a Civil War veteran’s back, makes him feel like stepping out with the youngsters a quarter his age. It was a day for picnics, for boating, for the beach or a long ride into the country. . . Most of the strikers felt good.

Tom Girdler, who ran Republic, had said that he would go back to hoeing potatoes before he met the strikers’ demands, and word went around that old Tom could do worse than earn an honest living hoeing potatoes. The strike was less than a week old; the strikers had not yet felt the pinch of hunger, and there was a good sense of solidarity everywhere.

Because it was such a fine summer day, many of the strikers brought their children out onto the prairie to attend the first big mass meeting; and wherever you looked, you saw two-year-olds and three-year-olds riding pick-a-back on the shoulders of steelworkers.

The police brutality was captured on film.

Teaching Activity. By Bill Bigelow and Norm Diamond. Students “become” several of the social groups who participated in the 1934 Longshore Workers Strike—some of whom had to answer the question, “Which side are you on?”

On this Memorial Day weekend, we feature two articles: one about the early origins of the holiday, led by African Americans in Charleston, South Carolina after the Civil War, and the second by Howard Zinn urging us to never embark on mass slaughter again.