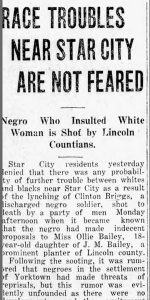 Clinton Briggs, a 26 year old WWI veteran, was walking down the street in Arkansas when a white woman brushed up against him.

The woman stated he wasn’t allowed to walk on the sidewalk, he replied “This is a free man’s country.”

Within hours, Briggs was dragged outside of town by a group of white men who chained him to a tree with car chains. The men shot Briggs several times and his body was found days later by a farmer.

Learn more about the story of Clinton Briggs in the Encyclopedia of Arkansas History and Culture. There it notes,

According to historian Nan Elizabeth Woodruff, like many African-American soldiers who returned to the South following World War I, Briggs found that his service to his country was a threat to the traditional, segregated southern way of life. He became a target of local whites, who wanted him to return to his former subordinate position.

Daniel Mack, a WWI veteran, was beaten to death by a mob of white men.