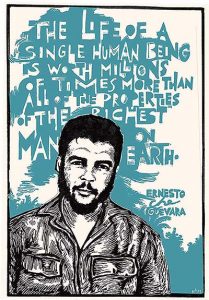 On this day in 1967, revolutionary leader Che Guevara was killed by U.S. military backed-Bolivian forces, working with the CIA.

We share here a Democracy Now! program about Che’s murder. It features an interview with Michael Ratner and Michael Steven Smith, authors of Who Killed Che? How the CIA Got Away with Murder, who draw on previously unpublished government documents to argue the CIA played a critical role in the killing. The program explains,

Revolutionary Ernesto “Che” Guevara, born in Argentina in 1928, rose to international prominence as one of the key leaders of the 1959 Cuban Revolution that overthrew U.S.-backed dictator Fulgencio Batista.

After a period in the new Cuban government leadership, Che aimed to spark revolutionary activity internationally.

On October 8, 1967, he was captured by Bolivian troops working with the CIA. He was executed one day later.

The line of the [U.S.] government was that the Bolivians did it, we couldn’t do anything about it. That’s not true. This whole operation was organized out of the White House by Walt Whitman Rostow. And the CIA, by this time, had become a paramilitary organization.

[Che became] a symbol for revolutionary change… He still remains, of course, that today. If you go to Occupy Wall Street, if you go to Tahrir Square, you will see people who are wearing Che T-shirts, because they understand that their obligation, their necessity, is to take on the 1 percent. And that’s what Che was about. And that’s why I think he remains such a hero for people in the streets today.