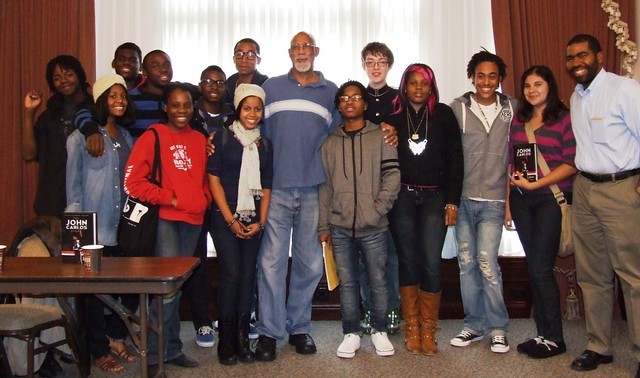 “John Carlos was just so inspiring. Out of all the important people that have come to speak to us—he’s the only one who kept me awake. After hearing him speak and his story, I want to be somebody better in life. I don’t even really like to read, but I want to read his book, and capture all the important parts of it, and rethink myself, how I can be a better person, and how I can make a change.” —Gwendolyn, 11th grade

Gwendolyn’s enthusiasm was echoed by the more than 100 students and teachers at Capital City Public Charter School who had the opportunity to hear from 1968 Olympic icon and political activist John Carlos and sportswriter Dave Zirin on Oct. 3, 2011. As part of the national book tour to launch The John Carlos Story (Haymarket Books, 2011), Carlos and Zirin spoke to the students about that moment in history, the limited explanations given in textbooks, and its continued significance.

Dave Zirin began the 60-minute session at the school with a description of the demands made by the Olympic Project for Human Rights, the symbolism of the photo, and the threats faced by John Carlos and Tommie Smith during and after the Olympics due to the stand they took. John Carlos followed with stories from his life and encouraged students to learn the true history of the United States and the world.

Carlos pointed out that textbooks include the famous photo of Tommie Smith and himself with their fists in the air because those in power “cannot ignore the power of that picture, that demonstration. So they take it and they put it in the textbook for the students to see. But yet and still, they give you no more than two lines to explain what that picture’s worth. They would never express the why, where, and whats, and the necessity of this demonstration. So that’s why it’s imperative that you guys push yourselves to learn your history. . . .Because this world, I’m leaving it to you. I did mine. It’s time for you guys to get ready to step up and do yours. Remember, I wasn’t 57 or 58 or 60. I had just turned 23 years old.”

After the presentation, students had the opportunity to ask questions.

Why did you do it?

“Why did I do it? Because it was so many individuals that were in positions of power that chose just to lay back. I heard individuals make statements like, ‘It’s just the way it is.’ But because it’s just the way it is, is that the right way? I could never accept it. I could never accept that fact that some of my fellow students didn’t have food in their iceboxes or didn’t have clothes to go to school. Or the fact that their fathers was dope fiends because somebody came and put dope on them. . . . Those things were totally wrong and somebody had to step up to the plate and say we have to deal with this as a society. What I’m saying is, you students, you have to really get a chance to observe something and look at it from every perspective. Turn it upside down, turn it sideways, turn it backwards and look at it, because you have a right to come to your own conclusions, and then what you do is you sit down and have some sort of intellectual discussion about it and find out who the shakers and the bakers are.”

Who did you look up to?

“First and foremost was my father. My father taught me quite a bit. Paul Robeson. . . . Paul Robeson and my father, they were the two biggest role models for me. And then once I started getting into school, I had a lot of admiration and respect for Frederick Douglass. These individuals kind of molded me. I had the opportunity to meet Malcolm X—went down the street, jogged down the street—as he would be tearing to the next location, I’d be jogging with him, trying to pick his brain, get the knowledge. I always had admiration for any individual who said, ‘Man, I’m going against the grain,’ because it didn’t seem like they were hypnotized going downstream not knowing the prize was really upstream, so I admire all of those individuals. . . . But my dad is probably the biggest inspiration in my life.”

Video clip of Gwendolyn, quoted at the top of this page. More student reflections on the presentation: Tiffany and Raymond.

This school visit was coordinated by 11th-grade U.S. history teacher Julian Hipkins III, Dave Zirin of Edge of Sports, and Teaching for Change. Thanks to intern Jozi T. Zwerdling for the transcription.

A full tape of the presentations and Q&A will be posted online as soon as it is available.

For more information about the book and national tour, visit: The John Carlos Story.