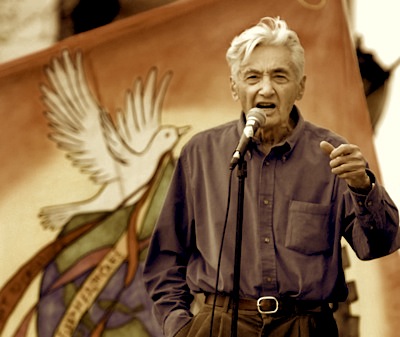 This special edition came about after scholars presented and discussed perspectives on the important influences of Howard Zinn to education, history, and citizenship at the 2010 Midwest Peace and Justice Summit in Indianapolis.

As the editors explain in the Introduction:

The collection begins with a variety of essays concerning the personal influence of Zinn to each of the different scholars from diverse academic disciplines. Nathalia Jaramillo explores Zinn’s life experiences and philosophy through his various roles as a historian, activist, and teacher. Jason Kelly’s essay takes us back to an important act of academic resistance in Zinn’s life where he encouraged his colleagues and the field in general to trade notions of objectivity for responsible citizenship. John McKivigan reflects on his initial encounter with Zinn’s work as he was influenced by his unique combination of scholarship and activism. Michael Snodgrass’s essay brings critical insight to Zinn’s radical stance as one that should be seen as common citizenry. Debbie Sonu discusses the notion of disobedience through Zinn’s life and work while analyzing the political and ideological system of globalization.

Following the essays, Sheri Leafgren’s article reflects on personal teaching experiences as she explores Zinn’s influence on ideas regarding the complexities and consequences of classroom disobedience. Aaron Cooley’s article discusses why dissent, democracy, and education are vital to reviving progressive discourse and activism. Todd Price explores his own encounters with Zinn as teacher, activist, and filmmaker marking how the scholar influenced his perceptions of history and a politics of resistance. Finally, Tony Whitson’s article uses critique by and of Zinn to explore the ways in which notions of American exceptionalism, human progress, and history itself are employed by contemporary, conservative influences on education.

Indeed, as the epigraph states, we are not born critical. Zinn’s work and the efforts of those that work in the same tradition ultimately point us to how we might both learn to be critical and teach others in critical ways. Our students deserve an opportunity to formulate their own truth, one that might challenge the histories we tell ourselves, seek out the voices on the margin, and commit to working against the social reproduction of inequality. Fostering new forms of engaged citizenship begins with this critical exploration as we encourage our students and communities within we work to find their voices and use them, both individually and collectively. It is the hope of the editors that this collection helps to continue the conversation on the work we do as scholars, as teachers, as activists, and as citizens. Most importantly, we wish to encourage the notions of hope and possibility in social change through this reflection of what we have come to know as the spirit of Howard Zinn.

“The Life and Work of Howard Zinn” is currently out of print.

I. INTRODUCTION by ROBERT J. HELFENBEIN & ROSE A. JACKSON

I.  HOWARD ZINN: HISTORIAN/TEACHER, AS CITIZEN by NATHALIA E. JARAMILLO

II. HOWARD ZINN AND THE STRUGGLE FOR THE MICROPHONE: HISTORY, OBJECTIVITY, AND CITIZENSHIP  by JASON M. KELLY

V. DISOBEDIENCE AND THE COMMONSENSE REVOLUTION by DEBBIE SONU

VI. REVITALIZING POLITICS NOW AND THEN: HOWARD ZINN ON DISSENT, DEMOCRACY, AND EDUCATION by AARON COOLEY

VII. THE MAGNIFICENCE OF GETTING IN TROUBLE:  FINDING HOPE IN CLASSROOM DISOBEDIENCE AND RESISTANCE  by SHERI LEAFGREN

VIII. HOWARD ZINN AND THE STRUGGLE FOR REAL HISTORY IN THE UNITED STATES by JAMES ANTHONY WHITSON