For the 10th anniversary of the launch of the war on Iraq, Alternative Radio posted Howard Zinn’s talk, Against War.

In this talk recorded on March 17, 2006, Zinn provides a powerful critique of the war against Iraq and the history of U.S. empire building. He asks why the American people fall for the pretexts of war over and over again. Here is a brief excerpt: 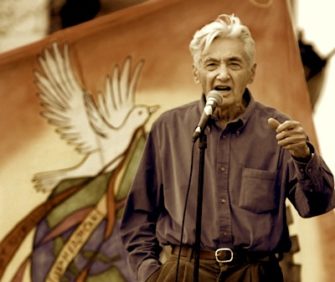 If you knew some history—and I’m talking now about honest history. I’m not talking about the history we get in school, I’m not talking about the history which is subservient to the presidents and the Congresses and the Supreme Courts and the establishment and recounts the things they do for us all the time. No, I’m talking about a different kind of history, an honest history. If you know that history, know even some of that history, you know how often presidents have lied to the American public.

Audio. Talks and interviews by Howard Zinn on a wide range of topics.