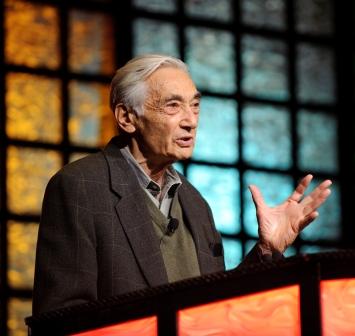 We were deeply saddened to learn of the passing of Howard Zinn on Wednesday, January 27, 2010. His incredible energy, wit, knowledge, political analysis, vision, and dedication had us convinced that he would outlive us all. At 87, he continued to inform and inspire in his presentations across the country, radio interviews, essays, and film making.

On January 19, 2010, Howard Zinn had graciously responded on air to questions submitted by teachers from across the country. In this Author on Air interview, coordinated by Harper Collins and the Zinn Education Project, he spoke of how textbooks leave “certain parts of the world and certain peoples of the world simply invisible.” He gave examples including Haiti, labor activists, and immigrants.

Howard Zinn has left a lifetime of scholarship and inspiration to make visible the people and places that textbooks leave out. A People’s History of the United States and his many other books, essays, plays, and film provide a wealth of resources for teachers and students. But even more important, Howard Zinn has inspired thousands of educators to recognize the importance of their own role in encouraging young people to think more critically about history and society, and to believe that they can make a positive difference.

Countless teachers have been inspired, by reading A People’s History or simply learning about Howard Zinn’s life, to ensure that their students learn that history is made not by a few heroic individuals, but instead by people’s choices and actions, thereby also learning that their own choices and actions matter.

Here are a few tributes to Howard Zinn. There are many more on HowardZinn.org.