Role plays are such an excellent way of engaging students in learning. When the Impossible Became Possible: A Reconstruction Mixer allows students to interact with both the content and one another to further their learning. I chose to do the lesson at the end of our unit on Reconstruction. Students had a good basis of understanding, but only from the newly freedmen and women’s perspective. This activity revealed to the students, as well as myself, the new possibilities that many Americans recognized after emancipation. 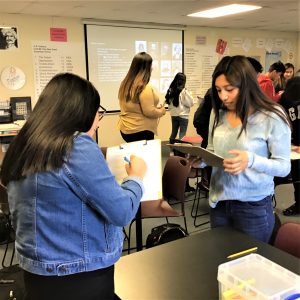 Students in Andy Coulombe’s classroom interview each other during the Reconstruction Mixer activity.

During our debriefing discussion, some students were struck by the narrow thinking behind many activists who placed, as one student mentioned, “priorities of justice,” believing that the nation could only have justice for one group at a time. Another student even mentioned how easy it was for many of the people involved in social activism to lose site of the bigger picture of “justice for all,” refuse the collaboration and solidarity of others and allow racism and sexism to derail their own movements. One group of students connected past learning to debunk this myth by mentioning how the Women’s Liberation Movement, Chicano Movement, American Indian Movement and African-American Civil Rights Movements all co-existed and moved towards social justice during the same decades of the 20th century.

I was impressed with the connections that this activity allowed for my students to make. It was a perfect lesson to include in our study of Reconstruction.