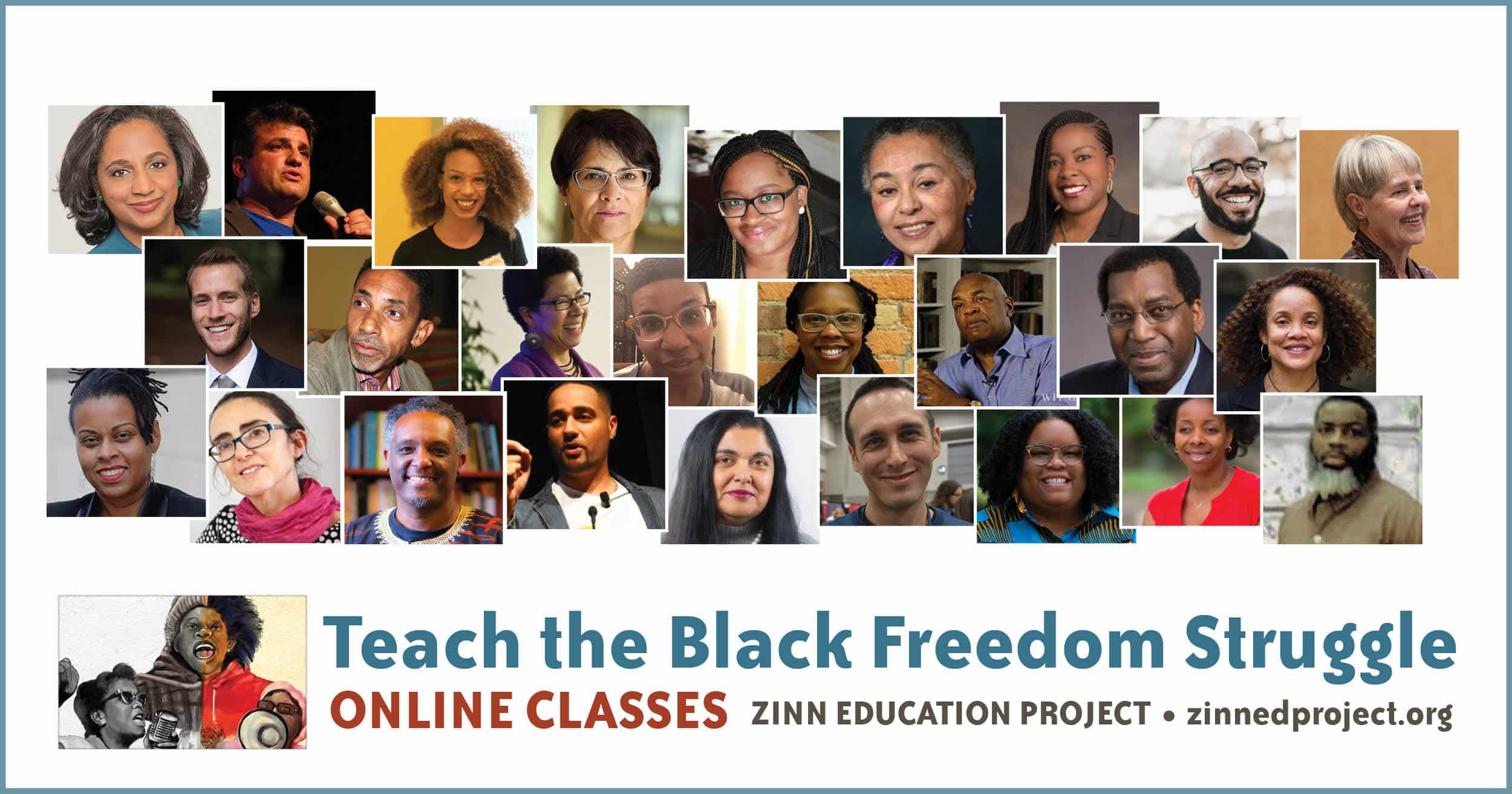 This is such a wonderful series — content-wise and soul-feeding.

This is one of the best professional developments I have ever been to, hands-down. I am so grateful. This series is giving me hope in this difficult time.

Phenomenal series so far. Even more important during our current situation, as people are engaged and able to see each other. I’ve been here every Friday and look forward to these talks.

These comments are from three of the hundreds of teachers and students who attended have attended our online classes with people’s historians. These classes offer the chance to learn directly from leading historians and to meet peers from across the country.

The classes are held at least once a month on Mondays at 4:00 pm PT / 7:00 pm ET for 90 minutes. In each session, the historian is interviewed by a teacher and breakout rooms allow participants (in small groups) to meet each other, discuss the content, and share teaching ideas. We designed the sessions for teachers and other school staff, however, parents, students, and others are welcome to participate. ASL is provided.

June 7, 2021: When South African Apartheid Was Overthrown: Lessons for the Movement for Black Lives Today The struggle against the racist apartheid regime in South Africa was a global rebellion that included many Black people in the United States. African Americans saw the parallels between the system of white supremacy in South Africa and the one in the United States.  The activism and solidarity of African Americans played an important role in overthrowing apartheid. This struggle holds many lessons for the movement for Black lives today.

October 4, 2021: Until Justice Be Done: The U.S. Black Freedom Struggle Before Reconstruction The half-century before the Civil War was beset with conflict over equality as well as freedom.

Teach Reconstruction campaign adviser Dr. Kate Masur joins the Zinn Education Project to speak to teachers about the history of the movement for equal rights that courageously battled racist laws and institutions, Northern and Southern, in the decades before the Civil War. Her book, Until Justice Be Done: America’s First Civil Rights Movement, From the Revolution to Reconstruction, lays out the indispensable role of African Americans in shaping the American ideal of equality before the law. Masur will share stories from her research and the class will explore how this history can be taught to students.

We launched the series when school buildings closed in March of 2020, in collaboration with author Jeanne Theoharis. Every Friday afternoon, we hosted an historian in conversation with a teacher or teacher educator. High school teacher and Rethinking Schools editor Jesse Hagopian has served as the primary host, with guest hosting by Tiffany Mitchell Patterson, Jessica Rucker, Cierra Kaler-Jones, and Adam Sanchez.

Fridays became a time to look forward to learning through stories about people’s history, to meeting other educators, and to finding a road map forward in the midst of this pandemic. As one participant said, “Thank you for getting us together and giving me hope that we are not alone, and that we can think and act ourselves out of this pandemic.”’

Beginning in the fall of 2020, we switched to offering the sessions at least once a month, on Monday evenings.

Each link below includes highlights from the session, a list of the resources recommended by the presenters and participants, participant reflections, and a full video recording.

May 10, 2021: How the Word Is Passed: A Reckoning with the History of Slavery Across America

Clint Smith is a poet, staff writer at The Atlantic, and teaches writing and literature in the D.C. Central Detention Facility. Smith, in conversation with Cierra Kaler-Jones, spoke about his new book, How the Word Is Passed, an examination of how monuments and landmarks represent — and misrepresent — the central role of slavery in U.S. history and its legacy today.

The Zinn Education Project is developing lessons to bring this essential book to the classroom.

April 26, 2021: The Struggle Against the Prison Industrial Complex

Historian Garrett Felber and abolitionist organizers Stevie Wilson and Safear Ness talked about the growth of the carceral state and resistance movements with Jesse Hagopian.

Felber, author of Those Who Know Don’t Say: The Nation of Islam, the Black Freedom Movement and the Carceral State, is project director of the Parchman Oral History Project and was the lead organizer of the Making and Unmaking Mass Incarceration conference. He co-founded Study and Struggle, a project that organizes against criminalization and incarceration in Mississippi through mutual aid, political education, and community building. They provide a bilingual Spanish and English curriculum with discussion questions and reading materials, as well as financial support, to over 100 participants in radical study groups inside and outside prisons in Mississippi. Learn more.

This interactive online class featured a conversation between Jeanne Theoharis, scholar and co-founder of the series, and Tera W. Hunter, history professor at Princeton University and author of To ‘Joy My Freedom: Southern Black Women’s Lives and Labors After the Civil War.

Hunter began with the story of the 1881 Atlanta Washerwomen’s Strike and went on to share many more stories of organizing by Black women for labor rights, public health, voting rights, and the right to joyful endeavors (such as dancing) from the Reconstruction era through today.

By starting the history about Black women on this land with us as free people and as people agitating for our freedom, by prioritizing all Black women’s voices and coming up to the present day, Dr. Gross and Dr. Berry illuminate greater possibilities for our collective freedom dreams and struggles for collective liberation. — Charlene A. Carruthers

To learn about the long history of the voting rights struggle leading to the electoral victory in Georgia, we were joined by SNCC veteran Judy Richardson and the co-editors of Julian Bond’s Time to Teach: A History of the Southern Civil Rights Movement, Jeanne Theoharis and Pamela Horowitz.

Time to Teach is a compilation of lectures by SNCC veteran and university professor Julian Bond (1940 – 2015). Bond had his own voting rights struggle in Georgia when the State House of Representatives refused to seat him as a state representative, due to his public statements against the Vietnam War.

Jan. 11, 2021: The Rebellious Life of Mrs. Rosa Parks | Jeanne Theoharis, in conversation with Jesse Hagopian, spoke about Rosa Parks’ activism prior to the Montgomery Bus Boycott, her trip to the Highlander Folk School, and the decades she dedicated to challenging racism in the North. This session is based on the young readers edition The Rebellious Life of Mrs. Rosa Parks by Jeanne Theoharis and Brandy Colbert, to be released in February 2021. There is a companion classroom lesson for this session by Bill Bigelow.

Dec. 14, 2020: Reconstruction: Repression and Resistance | Kidada E. Williams, in conversation with Tiffany Mitchell Patterson, discussed the history of repression and resistance during Reconstruction with contemporary connections. Williams is a Detroit-based writer and historian who studies African American survivors of racist violence. Williams is an associate professor at Wayne State University. She is the author of They Left Great Marks on Me and co-editor of Charleston Syllabus: Readings on Race, Racism, and Racial Violence. Her podcast, Seizing Freedom, will be released in early 2021.

Nov. 16, 2020: Paul Robeson, Political Outlaw: Lessons for Today from the Black Radical Tradition | Greg Carr, in conversation with Jesse Hagopian, talked about Paul Robeson and the Black radical tradition. Carr is an associate professor of Africana Studies, chair of the Department of Afro-American Studies at Howard University, and Adjunct Faculty at the Howard School of Law. Carr is co-founder of the Philadelphia Freedom Schools Movement and an advisor for the Zinn Education Project’s Teach Reconstruction campaign. See Carr’s two-minute history lessons on key figures and events in U.S. history.

Oct. 19, 2020: Organizing for Voting Rights: Lessons from the Student Nonviolent Coordinating Committee (SNCC) | Charles M. Payne, the Henry Rutgers Distinguished Professor of African American Studies at Rutgers University Newark and the Director of the Joseph Cornwall Center for Metropolitan Research joined us to discuss voter suppression and white terrorism in the mid-20th century, in a conversation led by Cierra Kaler-Jones. Read highlights and stream the recording.

July 10, 2020: Abolitionists and Reconstruction Manisha Sinha joined high school teacher Adam Sanchez to talk about the abolition movement and Reconstruction. Sinha explained that the abolition movement should not be taught as a collection of individuals, but instead as a radical social movement, with connections to the Movement for Black Lives today.

June 26, 2020: A History of Rebellions Jeanne Theoharis and Jesse Hagopian discussed various rebellions in U.S. history — including what they have in common and how they differ from current events. Theoharis encouraged educators to consider “the many tendrils” that led to this current movement and others before it.

June 19, 2020: Reconstruction and Juneteenth Greg Carr and high school teacher Jessica Rucker talked about how Juneteenth is one of many days where African Americans celebrate being “freed” but still not “free” and how the times we are in today could be considered a third Reconstruction or a second Founding.

June 12, 2020: Reconstruction and Issues of Citizenship, Suffrage, and Movement Building in the 19th CenturyMartha S. Jones, in conversation with Tiffany Mitchell Patterson, addressed the themes of our campaigns to Teach Reconstruction and to teach about voting rights. She highlighted the vital and too often ignored role of Black women in the fight for voting rights.

June 5, 2020: Examining the Historical Roots of the 2020 Rebellion Keisha N. Blain and Jesse Hagopian addressed the role of police throughout U.S. history, the connection between lynching and police brutality, and the importance of highlighting stories of resistance, particularly by women of color in the fight for human rights.

May 29, 2020: Black Feminist Organizing: 1950s to the 21st Century Barbara Ransby joined in conversation with Jesse Hagopian about the history of Black feminist organizing. That day, the nationwide rebellion in protest of police brutality was in everyone’s hearts and minds, and Ransby made connections between past and present struggles.

May 22, 2020: Black Left: 1930s to the Early 1950s Robin D. G. Kelley described and challenged stereotypes about communism in U.S. history, in a conversation with Cierra Kaler-Jones, describing the histories of the Scottsboro Nine, the Southern Tenant Farmers Union, and other individuals.

April 24, 2020: Student Nonviolent Coordinating Committee On this 60th anniversary of the Student Nonviolent Coordinating Committee (SNCC), we hosted SNCC veterans Courtland Cox and Judy Richardson, in conversation with high school teacher Jessica Rucker. They described the role of popular education materials and a network of organizers across generations.

March 27 and April 3, 2020: The Rebellious Life of Mrs. Rosa Parks Based on Jeanne Theoharis’s book of the same name, this session introduced participants to Rosa Parks’ activism prior to the Montgomery Bus Boycott, her trip to the Highlander Folk School, and the decades she dedicated to challenging racism in the North. Bill Bigelow wrote a lesson to bring this more complete story of Rosa Parks to classrooms.

Each session or mini-class is for 90 minutes. There are breakout rooms for about 12 minutes about half-way through the session to allow participants (in small groups of five or six) to meet each other, discuss the content, and share teaching ideas. We designed the sessions for teachers and other school staff, however, parents, students, and others are welcome to participate. The session format is as follows:

These sessions are made possible thanks to support from the Communities for Just Schools Fund, individuals, and the donors to the Teach the Black Freedom Struggle campaign.

Please add your support and make a donation so that we can continue to offer people’s history lessons, resources, workshops — and now online mini-classes — for free to K-12 teachers and students. We depend on individuals like you.