At Kent State University, the Ohio National Guard shot unarmed college students — some who were protesting the war and others who were passing by. The guards fired 67 rounds over a period of 13 seconds, killing four students (Allison Krause, Jeffrey Miller, Sandra Scheuer, and William Knox Schroeder) and wounding nine others. 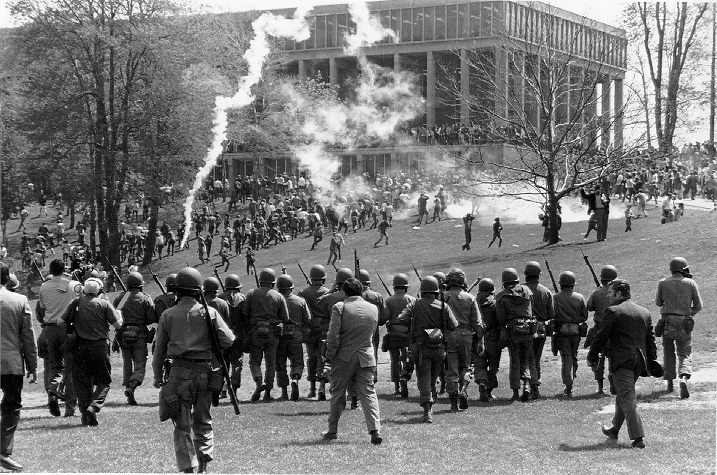 Howard Zinn wrote in You Can’t Be Neutral on a Moving Train about the massacre and meeting the family of one of the four students.

The Cambodian Invasion provoked nationwide protests, and on the campus of Kent State University, in Ohio, trigger-happy National Guardsmen fired into a crowd of unarmed student demonstrators, killing four of them, crippling another for life. A photo flashed around the world showed an unarmed young woman, her face anguished, bending over the body of one of the dead students.

On television I saw the father of one of the victims, Allison Krause, barely able to control his grief, pointing to the fact that President Nixon had referred to student protesters as “bums.” He cried out, “My daughter was not a bum!”

A few years later, when some visiting parents were sitting in on the introductory session of my course “Law and Justice in America,” I handed out the syllabus, which included as one of the course topics the shootings at Kent State. At the end of the session, one of the new students came up and introduced herself and her parents. She was Laurie Krause, the sister of Allison Krause. I recognized her father from the television screen and felt a pang of unease that their unspeakable grief was represented so matter-of-factly on a course syllabus. But they seemed to appreciate that the Kent State affair was not forgotten.

The spring of 1970 saw the first general student strike in the history of the United States, students from over four hundred colleges and universities calling off classes to protest the invasion of the Cambodia, the Kent State affair, the killing of two black students at Jackson State College in Mississippi, and the continuation of the war.

Learn more about Kent State at the website, Mapping May 4 with lots of primary resources.

While most people know that students were killed at Kent State in 1970, very few know about the murder of students at Jackson State and even less about South Carolina State College in Orangeburg.

In Orangeburg, two years before the Kent State murders, three students were killed and 28 students were injured — most shot in the back by the state police while involved in a peaceful protest. Learn more from the film Scarred Justice: The Orangeburg Massacre 1968.

The Jackson State killings occurred on May 14–15, 1970, at Jackson State College (now JSU) in Mississippi. A group of student protesters were confronted by city and state police. The police opened fire, killing two students and injuring twelve.

Film. Produced by Judy Richardson and Bestor Cram. 2009. 57 minutes. A documentary film that brings to light the story of the attack by state police on a demonstration in Orangeburg, South Carolina -- leaving three students killed and 28 injured.