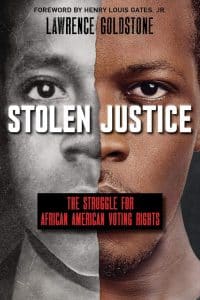 Stolen Justice details the complex history of voting for African Americans, including the lasting impact of major decisions made at pivotal points in U.S. history: the Constitutional Convention, the Civil War, the 13th and 14th amendments during Reconstruction, and the 1965 Voting Rights Act and its dismantling by the Supreme Court under Chief Justice John Roberts in 2013.

By interweaving stories about African Americans who fought for the right to vote and those who worked against them, author Lawrence Goldstone highlights the adversities African Americans have faced to gain and retain access to the ballot. He unpacks many of the structural, systematic, state-sanctioned, and legal blockades to voting, including state constitutional amendments in North Carolina, Mississippi, Louisiana, and South Carolina that insidiously virtually eliminated African American participation.

Running parallel to the stories are portrayals of lesser-known heroes like Alex Manly, Judge Alexander Rives, Cornelius Jones, and Jackson W. Giles who worked to dismantle systemic racism at the ballot box. Goldstone resurrects decades-old court cases, bringing new life to the past by clearly connecting yesterday to today and invoking current questions about which Americans have participatory access to democracy.

Book - Non-fiction. By Gordon A. Martin Jr. 2014. A detailed portrait of brave individuals who risked everything in their fight for the right to vote.

Book – Non-fiction. By Lawrence Goldstone. 2018. 288 pages. This young adult book provides students with the history of the 1873 massacre of unarmed African Americans in Colfax, Louisiana and the subsequent Supreme Court Case.