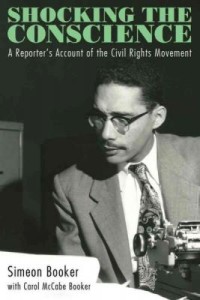 Within a few years of its first issue in 1951, Jet, a pocket-size magazine, became the “bible” for news of the civil rights movement. It was said, only half-jokingly, “If it wasn’t in Jet, it didn’t happen.” Writing for the magazine and its glossy, big sister Ebony, for fifty-three years, longer than any other journalist, Washington bureau chief Simeon Booker was on the front lines of virtually every major event of the revolution that transformed America.

Rather than tracking the freedom struggle from the usually cited ignition points, Shocking the Conscience begins with a massive voting rights rally in the Mississippi Delta town of Mound Bayou in 1955. It was the first rally since the Supreme Court’s Brown decision struck fear in the hearts of segregationists across the former Confederacy. It was also Booker’s first assignment in the Deep South, and before the next run of the weekly magazine, the killings would begin.

Booker vowed that lynchings would no longer be ignored beyond the black press. Jet was reaching into households across America, and he was determined to cover the next murder like none before. He had only a few weeks to wait. A small item on the AP wire reported that a Chicago boy vacationing in Mississippi was missing. Booker was on it, and stayed on it, through one of the most infamous murder trials in U.S. history. His coverage of Emmett Till’s death lit a fire that would galvanize the movement, while a succession of U.S. presidents wished it would go away.

This is the story of the century that changed everything about journalism, politics, and more in America, as only Simeon Booker, the dean of the black press, could tell it.