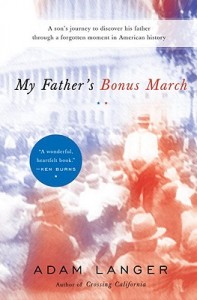 To his friends, Seymour Langer was one of the brightest kids to emerge from Chicago’s Depression-era Jewish West Side. To his family, he was a driven and dedicated physician, a devoted father and husband.

But to his Adam, youngest son, Seymour was also an enigma: a somewhat distant figure to whom Adam could never quite measure up, a worldly man who never left the city of Chicago during the last third of his life, a would-be author who spoke for years of writing a history of the Bonus March of 1932, when twenty thousand World War I veterans descended on the nation’s capital to demand compensation.

Using this dramatic but overlooked event in U.S. history as a means of understanding his relationship with his father, Adam Langer sets out to uncover why the Bonus March intrigued Seymour Langer, whose personal history seemed to be artfully obscured by a mix of evasiveness and exaggeration.

The author interweaves the story of the Bonus March and interviews with such individuals as history aficionado Senator John Kerry and the writer and critic Norman Podhoretz with his own reminiscences and those of his father’s relatives, colleagues, and contemporaries. In the process, he explores the nature of memory while creating a moving, multilayered portrait of both his father and his father’s generation.