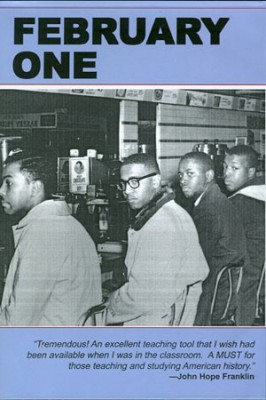 In one remarkable day, four college freshmen changed the course of American history. February One tells the inspiring story surrounding the 1960 Greensboro lunch counter sit-ins that revitalized the Civil Rights Movement and set an example of student militancy for the coming decade. This moving film shows how a small group of determined individuals can galvanize a mass movement and focus a nation’s attention on injustice. [Publisher’s description.]

“February One tells the neglected story of why and how four teenagers ignited a major protest movement. Educators will long feel a debt of gratitude to the filmmakers for this wonderful addition to the available resources on the modern African American freedom struggle.” —Clayborne Carson, Stanford University

“Tremendous! An excellent teaching tool that I wish had been available when I was in the classroom. A MUST for those teaching and studying American history.”  —John Hope Franklin

“This splendidly rendered, gripping documentary tells how four sit-in students risked everything to start an unprecedented, spontaneous non-violent revolution. Inspired by their incredible bravery, many of us followed their lead — and the result was the first national mass movement to eliminate the scourge of racism.” —Congresswoman Eleanor Holmes Norton