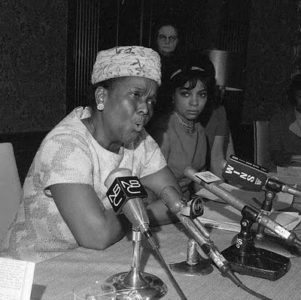 Ella Josephine Baker (Dec. 13, 1903 – Dec. 13, 1986) developed a sense for social justice early in her life. As a girl growing up in North Carolina, Baker listened to her grandmother tell stories about slave revolts. An enslaved woman, her grandmother had been whipped for refusing to marry a man chosen for her by the slave “owner.”

Baker studied at Shaw University in Raleigh, North Carolina. As a student she challenged school policies that she thought were unfair. After graduating in 1927 as class valedictorian, Baker moved to New York City and began joining social activist organizations. In 1930, she joined the Young Negroes Cooperative League, whose purpose was to develop black economic power through collective planning. Baker also involved herself with several women’s organizations. She was committed to economic justice for all people and once said, “People cannot be free until there is enough work in this land to give everybody a job.”

Ella Baker began her involvement with the NAACP in 1940. She worked as a field secretary and then served as director of branches from 1943 until 1946. Inspired by the historic bus boycott in Montgomery, Alabama, in 1955, Baker co-founded the organization In Friendship to raise money to fight against Jim Crow Laws in the deep South. In 1957, Baker moved to Atlanta to help organize Martin Luther King’s new organization, the Southern Christian Leadership Conference (SCLC). She also ran a voter registration campaign called the Crusade for Citizenship. On February 1, 1960, a group of black college students from North Carolina A&T University refused to leave a Woolworth’s lunch counter in Greensboro, North Carolina, where they had been denied service. Baker left the SCLC after the Greensboro sit-ins. She wanted to assist the new student activists because she viewed young, emerging activists as a resource and an asset to the movement. Baker organized a meeting at Shaw University for the student leaders of the sit-ins in April 1960. From that meeting, the Student Nonviolent Coordinating Committee — SNCC — was born.

Adopting the Gandhian theory of nonviolent direct action, SNCC members joined with activists from the Congress of Racial Equality (CORE) to organize in the 1961 Freedom Rides. In 1964 SNCC helped create Freedom Summer, an effort to focus national attention on Mississippi’s racism and to register black voters. Baker, and many of her contemporaries, believed that voting was one key to freedom.

With Ella Baker’s guidance and encouragement, SNCC became one of the foremost advocates for human rights in the country.

Her influence was reflected in the nickname she acquired: “Fundi,” a Swahili word meaning a person who teaches a craft to the next generation. Baker continued to be a respected and influential leader in the fight for human and civil rights until her death on her 83rd birthday. [Adapted from bio at the Ella Baker Center for Human Rights.]

Book - Non-fiction. By Wesley C. Hogan. 2009. An innovative study of what the Student Nonviolent Coordinating Committee (SNCC) accomplished and, more importantly, how it fostered significant social change in such a short time.