Anne Braden: Southern Patriot (1924-2006) is a first person documentary about the life of Anne McCarty Braden. Braden rejected her segregationist, privileged past to become one of the civil rights movement’s staunchest white allies. In the 1950s, Anne Braden was indicted on charges of sedition in a famous case after she helped buy a house for a Black family (the Wades) in an all-white suburb of Louisville, Kentucky.

An advocate of racial and economic equality for more than half a century, Ms. Braden was one of the white Southerners singled out for praise by the Rev. Dr. Martin Luther King Jr. in his “Letter from Birmingham Jail” in 1963. She and her husband Carl Braden worked on Henry Wallace’s campaign for the presidency and on the staff of the Southern Conference Educational Fund. Anne Braden edited its newspaper, The Southern Patriot.

In 1967, the Bradens were again indicted on charges of sedition, for helping to organize a protest against strip mining in eastern Kentucky. Braden’s activism ultimately spanned nearly six decades, making her one of the most enduring white voices against racism in modern U.S. history. [From the New York Times obit and the Subversive Southerner.]

Anne Braden: Southern Patriot (1924-2006) was directed by Anne Lewis in partnership with Mimi Pickering and produced with Appalshop. 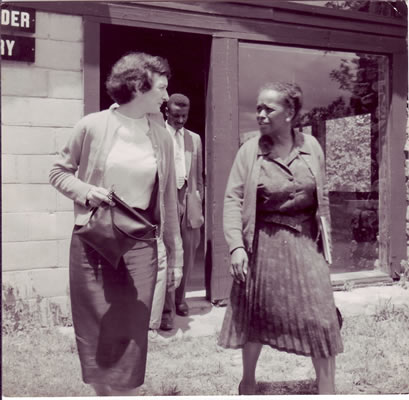 Anne Braden and Ella Baker at the Highlander Center. 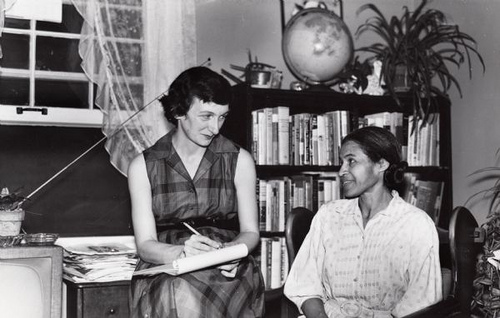 Anne Braden: Southern Patriot is an inspiring tribute to an extraordinary woman and an even more compelling set of ideas: namely, that we all have an important role to play in the struggle for racial and economic justice, and that there is more than one way to live in white skin. Anne was a shero of the first order, modeling white allyship and solidarity across lines of color for over 50 years. That few Americans will have heard her story before now is a sad commentary on the inadequacy of our nation’s educational system, and an even more distressing indication of how often bravery and courage are overlooked when they emanate from those who challenge some of our most cherished myths about American democracy. This film is a must-see. —-Tim Wise, author of White Like Me: Reflections on Race from a Privileged Son and Dear White America: Letter to a New Minority

A gem of a film, accented with freedom fighters who speak firsthand about carving a path through a traumatized, violent, racist South, to make way for one of the largest and most effective nonviolent movements for social change the world has ever seen. —-Joan Baez

A magnificent portrait of the Anne Braden I knew: courageous, militantly anti-racist to the core. Anne Braden changed my life; this film will change yours. —-Robin D.G. Kelley, author and historian 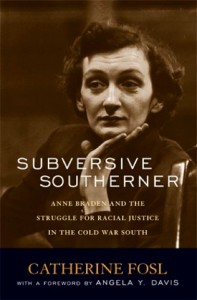 Anne Braden Institute for Social Justice Research (ABI) seeks to advance public understanding of the U.S. civil rights movement, both its powerful history and its unfinished agenda of racial and social justice.

Portrait of Anne Braden by Robert Shetterly, Americans Who Tell the Truth. The painting features the quote by Braden: “As long as people of color can be written off as expendable, and therefore acceptable victims of the most extreme inequities, none of the basic injustices of our society will be addressed; they will only get worse.”