Between late 1918 and later 1919, the United States recorded ten major race riots, dozens of minor, racially charged clashes, and almost 100 lynchings as white Americans tried to enforce the continued subjugation of Black Americans in the postwar era. This description of Red Summer is from the introduction to 1919, The Year of Racial Violence by David Krugler.

Krugler details the circumstances of many of these episodes of racist violence, revealing some clear patterns. In almost every case, white mobs instigated the violence in spite of the fact that they were often deemed “race riots,” as if culpability was shared by both Blacks and whites. In almost every case, the spark for the violence was the assertion of Black agency and full citizenship.

Krugler’s scholarship reminds readers of the limitations of mainstream civil rights curriculum, which too often leaves out the tradition of armed self-defense in the long Black freedom struggle.

Krugler notes: “In the following excerpt from my book 1919, The Year of Racial Violence: How African Americans Fought Back, I explain how key federal agencies, particularly the Military Intelligence Division and the Bureau of Investigation (forerunner of the FBI), reacted to the Red Summer. Intelligence officers, certain that socialists and communists were urging African Americans to take up arms, mistakenly believed that a revolution was imminent, that blacks across the country were conspiring to attack whites. In their eyes, the Red Summer was a Red Scare. Ignoring the indisputable evidence that white mobs were initiating the violence, the Military Intelligence Division and the Bureau of Investigation  began working with local authorities and gun dealers across the country to block the sale of weapons to African Americans. Just as the New Negroes fought back against white mobs, they resisted this national campaign to disarm them. Download an excerpt from 1919 here.”

Note from the Zinn Education Project: The book’s cover (not selected by the author) does not reflect the overall theme which is Black resistance. If you teach using this excellent book, please encourage students to consider what image would be a better representation of the book. If time allows, encourage them to write to the publisher to request they change the cover image in a subsequent printing.

Book — Non-fiction. By Eve L. Ewing. 96 pages. 2019. Poetic reflections on the Chicago Race Riots of 1919 — part of 'Red Summer' — in a history told through Ewing's speculative and Afrofuturist lenses. 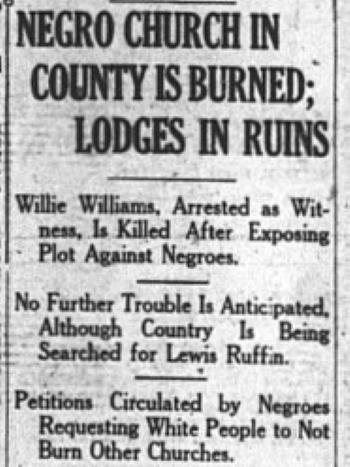 The Longview Riot is one example of white mob violence during the period known as "Red Summer." Photo: Daniel Hoskins at gun repository required by U.S. Marshall. Undermined African Americans' ability to engage in self-defense.